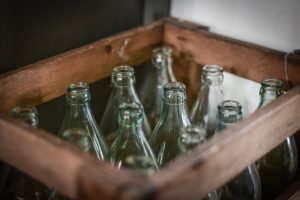 Greensboro — The Guilford County Democratic Party followed up with the City of Greensboro about the recent decision to end residential glass recycling. Many residents have decried this step backwards for recycling efforts in our state’s third-largest city. GCDP intern Celeste Cornelius met with the Greensboro City Manager to find out more and reported back. She found out that the city decided to end residential glass recycling because the city feels that glass collection costs more money than it is worth.

The choice to stop residential glass recycling was prompted by a renegotiation of the city’s contract with its contractors. The city weighs recyclables by the ton, and the city now feels that the weight of glass makes it ineffective to collect it in the traditional way. The city would need to discard around 40% of the resulting material as valueless.

Greensboro does have a solution to allow concerned citizens to recycle their glass. They are providing four designated glass disposal locations around the city and have plans to expand to ten later this year. That said, we are already aware that residents have expressed concerns over whether these locations will prove adequate to handle the city’s glass needs. Worse, citizens may not not take the time to separate out their glass and bring it to one of these locations. Most will simply throw it in the trash to be sent to a landfill.

Here’s the bottom line. The City of Greensboro has ended glass recycling because it’s bad for their profits. We wish they were as concerned with what’s bad for our planet.